The first test of a new protocol goes well. Dates sought first may work, but more tests are needed. Posted on 1/1/2015.

The first test of the self-challenge imposed by my article pertaining to 2015 dates encoded is tough one, because on January 1, 2015 Obama was on vacation in Hawaii, and there were no White House press conferences. His web site showed no action, but there was some news to be found about him that was aired this day – by Fox News. FOX is at the same skip as OBAMA, and the same absolute skip (but opposite direction) as the Hebrew date for 10 TEVET 5775, which is January 1, 2015. The story is about a secret (well, leaked) plan for the White House to reach out to Russia (i.e., show some more flexibility, perhaps in exchange for allowing oil prices to rise since the 45% drop in prices is 2014 is hurting Russia's economy). Crossing the date (at skip +1) is not the normal transliteration for PUTIN, but the five letters shown could be pronounced in a way to match his name. At a non-special case skip is an ELS of TO SURRENDER. This term touches both PUTIN and 10 TEVET 5775. Below the date and touching it is an ELS for RUSSIAN. 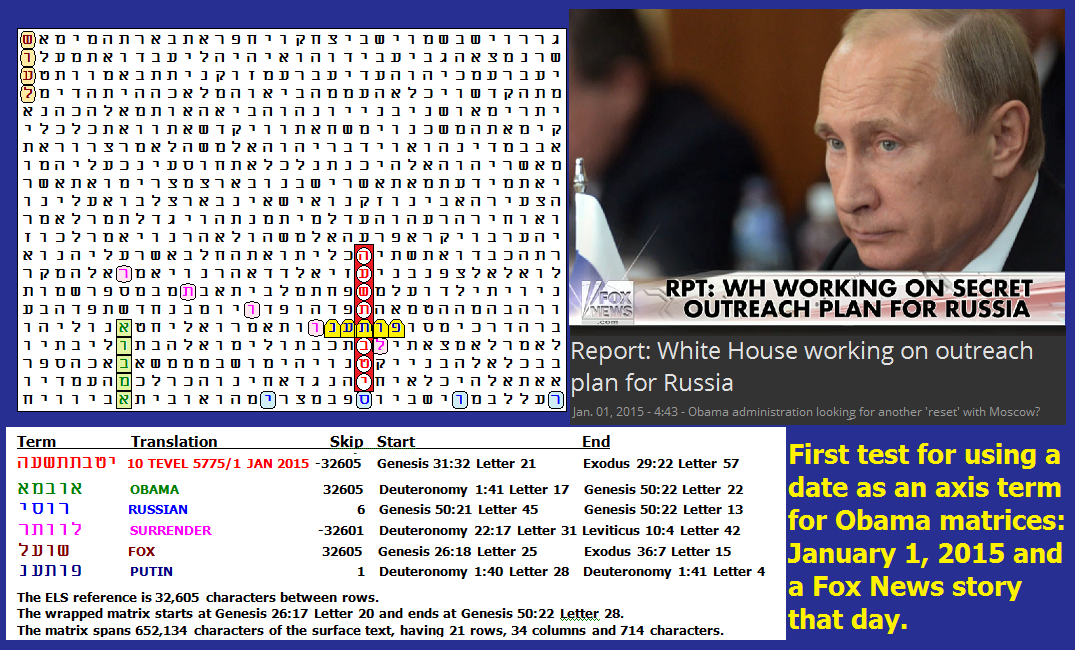 STATISTICAL SIGNIFICANCE OF THE MATRIX. As per my standard protocol, no statistical significance is assigned to the axis term, here 10 TEVET 5775 at its second lowest skip in wrapped Torah. But unlike my standard protocol, no statistical significance is assigned either to OBAMA because I knew before the experiment that it was at the same absolute skip as the date. Like the main axis term, it (or a more common spelling that ends with a letter hey) was required before I could hunt for anything else associated with the date.  So what was found a-priori? FOX at a special case skip (+/- or the absolute skip of the two axis terms) was there against odds of about 24 to 1. There was only one transliteration at skip +1 (best case scenario) in Torah for PUTIN, and while not the best spelling, the one shown is there on the 714-letter matrix against odds of about 427 to 1, but it nicely crosses the date.  The verb for SURRENDER was found at a non-special case against odds of about 3 to 1, but unlike what I would write in my usual rant against Obama, the word might pertain to what Obama wants from Putin rather than what Putin has been getting from Obama. Oh wait a minute... Obama has to be naive. While not shown yet, I just checked. If I expand the matrix down another three rows then NAIVE is included at skip +1. That would make an 816-letter matrix, and naive would be there at skip +1 against odds of about 6.44 to 1, but that's nor enough to justify lessoning the significance of other terms shown. The word RUSSIAN is not very significant. It was more likely to be found at a non special case skip than calling a coin toss correctly. Overall, the matrix was found against odds of about 58,850 to 1.