Probably not the winner, but she's likely looking for a high position in a Republican Administration. Posted 6/11/2015.

Carly Fiorina may have made it into the top 10 candidates for the Republican nomination for president in 2016, but her Torah Code matrix was not significant at all. There was 1 chance in 11.23 for the matrix above to be found based on C. FIORINA as the axis term. Neither the word for PRESIDENT nor that for a short form of the Hebrew year 5776 (2016) was found at a special case skip (+/-1 or the absolute skip of the axis term). As of June 11, 2015 she only beats Rand Paul, Chris Christie, Mitt Romney, Lindsey Graham, George Pataki, and Rick Perry. Previously she lost a bid for the Senate in California to Barbara Boxer, where a key issue was that Fiorina fired 18,000 people at HP and shipped many jobs overseas. 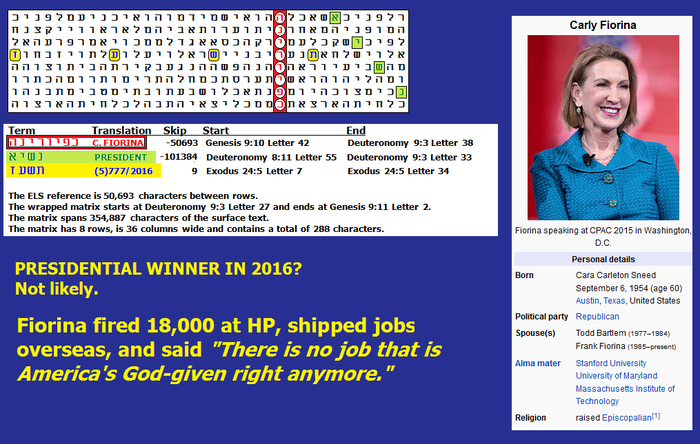