SCIENTIFIC ANALYSIS OR ANGER AT THE ALMIGHTY? Updated on 3/15/2018.

I am writing this update on March 15, 2018. Yesterday Stephen Hawking learned whether he was right or wrong about the existence of God and heaven, because on that day, at the age of 76, Stephen Hawking passed away. My first thought was that his soul must have found great relief upon being released from his tortured body. What follows is the article that I began to put together about him back in 2010.

On September 3, 2010, I read in the Jerusalem Post that Stephen Hawking declared “God was not needed to create the universe.” Again on May 16, 2011, he declared that "there is no heaven." As such, for the top matrix, I thought it was more than appropriate to check the Torah Code for his name in association with Genesis 1:1.  The match was indeed there at the 8th lowest skip for HAWKING.  It is shown below, and continued into Genesis 1:2, where near his name is near WAS UNFORMED AND WAS VOID.  The full open text by his name is “IN THE BEGINNING G-D CREATED THE HEAVENS AND THE EARTH.  NOW THE EARTH WAS UNFORMED AND WAS VOID. “  To those able to enjoy the wonders of Creation, Hawking's ideas seem unformed and void.  He can only communicate with eye blinks now. However, although he suffers like one who has been in the worst of accidents, it does not follow that the Universe was an accident. 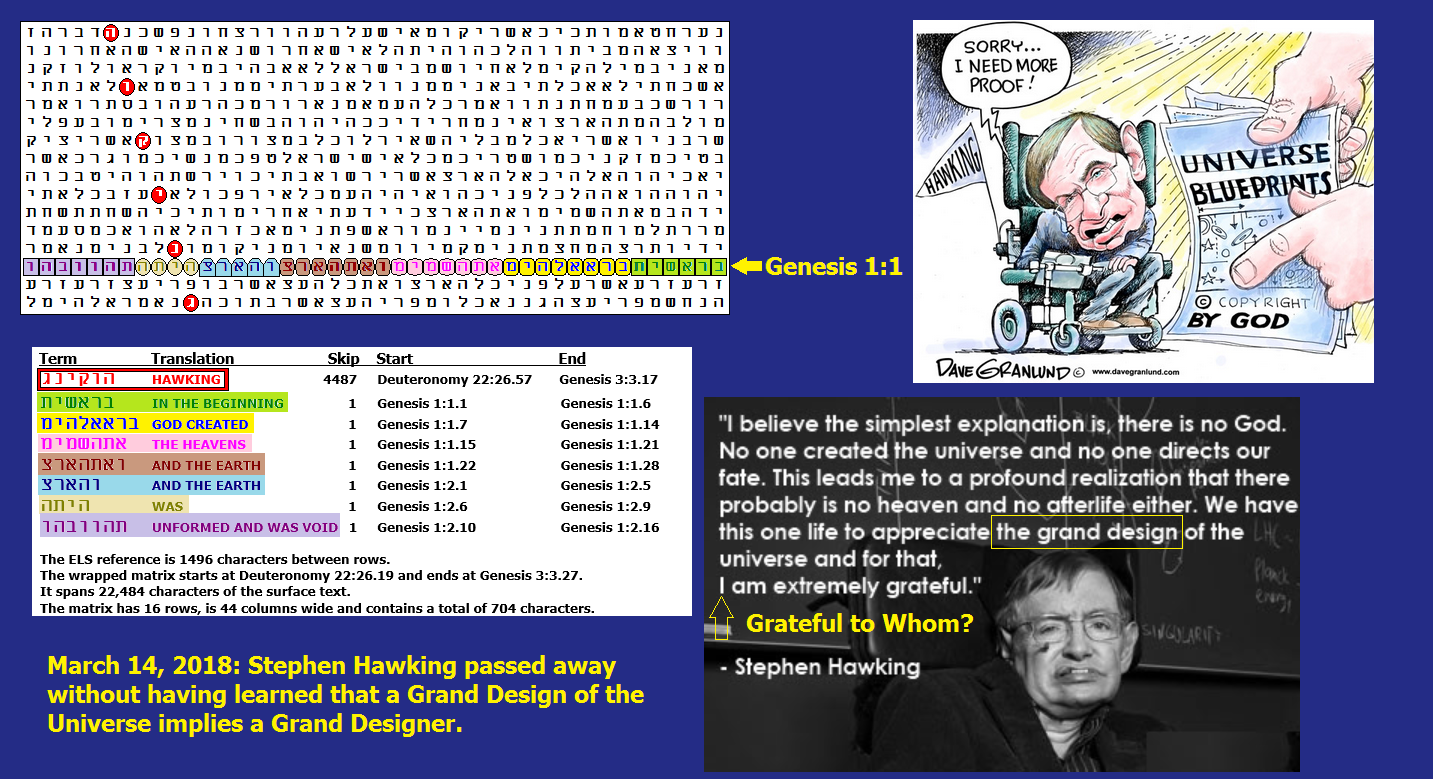 STATISTICAL ANALYSIS: As is standard in my protocol, no intrinsic value is assigned to the axis term HAWKING.  The sole a-prior phrase sought was Genesis 1:1 in its entirety: “IN THE BEGINNING G-D CREATED THE HEAVENS AND THE EARTH.” A very best case match would occur at ELS rank #1 for HAWKING and require 6 rows for HAWKING and 33 columns for IN THE BEGINNING G-D CREATED THE HEAVENS AND THE EARTH. The smallest possible matrix is therefore 198 letters in area. The text for Genesis 1:2 starting with NOW THE EARTH WAS UNFORMED AND WAS VOID was known in advance to be there since it must follow Genesis 1:1, so no statistical value is assigned to it. The area with a white background on the matrix shows the axis term and Genesis 1:1.  It occupies 16 rows, 39 columns, and a total area of 624 letters.  The odds against a match this good were about 61 to 1.  P value is calculated at ~0.0164.

SECOND MATRIX WITH HAWKING AND HEAVEN. The second matrix shown is based on the lowest ELS of HAWKING. One word was sought on an a-priori basis, HEAVEN. It turns out that with a row split of 2, HEAVEN touches HAWKING in a 55-letter matrix against odds of about 55 to 1. The full 121-letter matrix shown has the phrase LIKE THE STARS OF HEAVEN, and while Hawking is certainly deeply involved in the study of the stars, I did not seek STARS as an a-priori term, so I won’t include it in the probability study. Perhaps, if Dr. Hawking were to believe in heaven, he would have a matrix that has the term include his name rather than just brush it in this manner. On the other hand, while Hawking is unable to find heaven, heaven is able to find Hawking in the Torah Code.