THE TRUE COLOR OF THE MARTIAN SKY

Another mistake to add to accepted pressure values? Updated 4/20/2016

Color photos back from the Mars Science Laboratory include a pale blue sky.

This page examines the issue of the true Martian sky color and whether or not it is like that published by NASA/JPL. Was it deliberately changed from blue to pink or butterscotch during the process of photo analysis? The initial source of the controversy is an article by Goro Adachi entitled HIDDEN COLORS OF MARS. The sky color is particularly of interest to me now because on August 4, 2011, along with my son, I made a presentation at the 14th International Mars Society Convention in Dallas, Texas. There I discussed the results of an extensive audit that I carried out of published pressures for Mars Viking Landers 1 and 2. Our findings strongly challenge accepted pressures - see Mars Abstract and Links.

FIGURE 1 - THE CONTROVERSY STARTS WITH HOW OLD GLORY IS DEPICTED 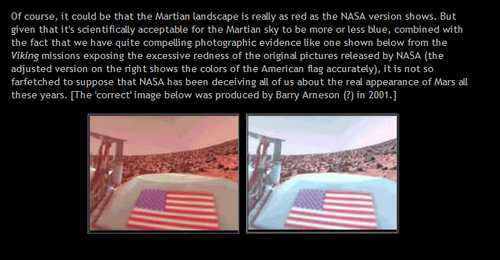 All of the purely scientific, non-religious research on Mars that is conducted by my son and is kept on my son's website. However this ArkCode website site is based around the Torah Code, so even though I often delve into serious scientific issues here, I almost always start with a look at the Code is see if there is anything resembling guidance from our Creator. In this case, I checked to see if MARS SKY is more closely associated with red or blue. It turns out that it only takes 84 letters to show MARS SKY (at its 4th lowest ELS) with a very special word for BLUE in the open text. The word for BLUE is pronounced tekhelet.

While the U.S. flag has red (white) and blue, the blue stripes on the Israeli flag are intended to symbolize stripes on a tallit, the traditional Jewish prayer shawl. Israelites used a blue colored dye called tekhelet. In the Bible, the Israelites are commanded to have one of the threads of their tallit (prayer shawl) with tekhelet so when they look at it they will think of the blue sky, and of the God above them in Heaven. There was about 1 chance in 20 to have this word for BLUE in the open text in an 84-letter matrix with MARS SKY. To my reader at NASA/JPL on April 20, 2016, I apologize that I had apparently removed the matrix during editing last month when I added more pictures of sky color as shown on MSL.  If you are curious about what the matrix showed, please write me at ArkHunt@Juno.Com and I'll try to send you the matrix, but it should not go on a NASA computer simply to make sure that you don't get in any trouble.

Figure 2 - MSL photos lend weight to the charge that Dr. Fletcher ordered the corruption of colors shown from Mars for 36 years.

Account of the Start of the Martian Sky Color Controversy (as portrayed on pages 39-40 of DEAD MARS, DYING EARTH by Dr. John Brandenburg):

The following day (sol 2 for Viking 1) was equally auspicious for JPL when the first color images were received.  As a crowd surrounded the monitors, the colors of the Martian landscape displayed themselves like an Arizona picture postcard: bright sunlight, blue sky flecked with hints of high clouds, reddish-brown soil and gray rocks.  The technicians, scientists and media representatives were spellbound. It looked just like home – at least it looked very familiar to anyone who had seen the desert regions in the southwest of the United States. Who would have imagined that our first look at another world would appear so earthly?  An American flag was proudly emblazoned on a domed compartment of the spacecraft which figured prominently in the scene. Never had its red, white, and blue colors glowed so brightly as they did beneath the Martian sky that day. For the first time humans beheld the sky of a planet different from their own – and it was a reassuring deep blue.

Amid the celebration, a very perplexed, newly graduated high school student named Ron Levin sat at a console at JPL. For over two hours Ron watched with the others as color images came in. Ron, the son of Dr. Gilbert Levin, a scientist connected with one of the tests aboard the lander, was fascinated. Like the rest of us, Ron saw the “blue sky” of Mars in the first color image. Unlike us, Ron also saw images of rocks with greenish patches on them.  While he watched, a Viking imaging team technician adjusted the color controls on every monitor in the laboratory, increasing the red channel so that the sky lost its blue tint and the color of the rocks shifted from an earthly reddish-brown to an unearthly, deep rusty-red hue.  When Ron attempted to adjust the monitors back to the original settings, he was told he’d be ejected from JPL if he persisted. To this day, Ron, now Dr. Ron Levin, physicist, makes it clear that, in his considerable estimation, there was no scientific justification for the adjustment in color. He speculates that the color was changed primarily because the planetary scientists took a dim view of the greenish patches on the rocks, which might have suggested to the public that some primitive form of plant life might be growing right on the surface of Mars. The sky of Mars has been red ever since.

As can be seen from Slide 2 of my son's PowerPoint presentation at the Mars Society Convention in Dallas, when we view our atmosphere from an altitude of 83,600 feet where pressure should be down to about 11.3 mbar (still a good bit higher than the 6.1 mbar at Mars areoid). It's also close to the color of the Martian sky at sunset. The color of the Martian sky would be expected to take on a redder color during a dust storm. But there is no reason to assume that it would always be reddish (or butterscotch) even when dust levels are exceptionally low. If accepted Martian pressures are too low, as we think we have proven in our Mars research and Report, then perhaps the sky color is just one more NASA mistake. There are web sites devoted to this issue, so I won't belabor it here.  NASA has often published photos that show a Mars that looks much more like Earth, but until MSL it always stated that the colors are exaggerated. One recent example is offered below.

There is a video HERE about where NASA/JPL appears to have gone wrong in its color calibration of the Martian sky color. Another excellent video showing how pressure should affect sky color is HERE. 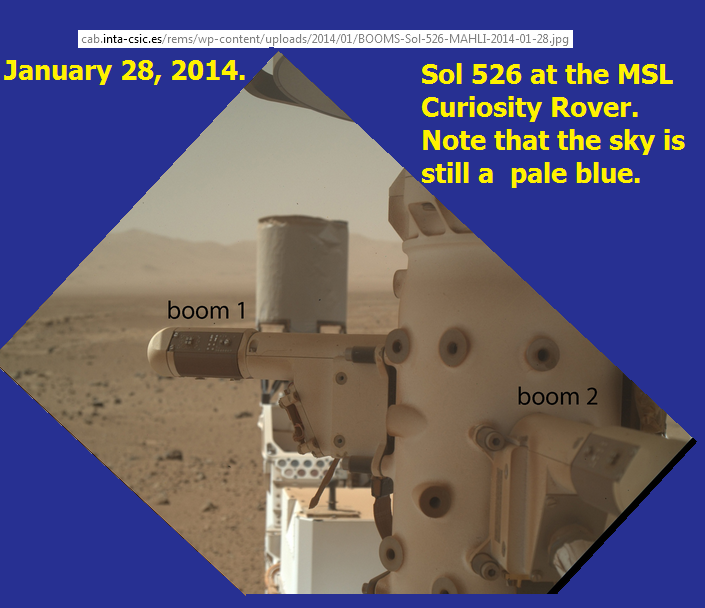