SHOULD COMET ISON BE THE CAUSE OF HYSTERIA?

Once again religious extremists are using a comet to call for the end of the world. The silliness can be found at http://www.youtube.com/watch?v=FvWJw-xhUyc. Although the comet will miss the Earth by 39,900,000 miles on December 26, 2013 (hardly close) it will fly only 724,000 above the sun's surface on November 28, 2013. The Earth will move near, but not through the tail of the comet on January 14-15, 2014. The original request that I received was as follows: “There are many warnings and much gov activity on the East coast and Puerto Rico.  They have delivered 3 million body bags to Puerto Rico. Many are claiming dreams and visions of a meteor hitting near Puerto Rico and causing a massive tsunami that will hit Florida and the East coast, as well. Would you please run a search on the Bible Code?” Per the request the matrix below has COMET ISON as axis term encoded through what looks like a warnings - but is it for Earth or for the comet itself? 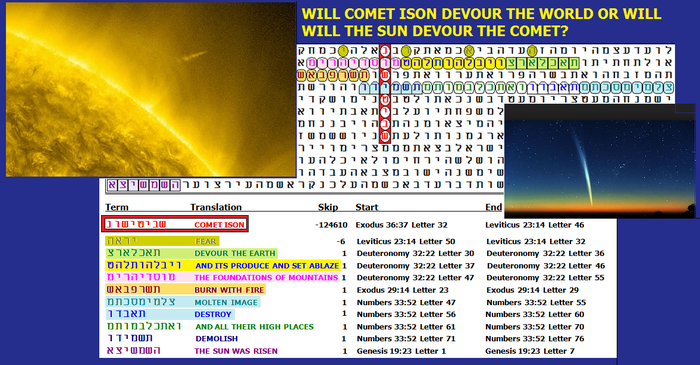 On the first row of the axis term is FEAR. Although is not at a special case skip (+/- 1 or the skip of the axis term), it does sum up the motivation to seek the matrix. On the second line in the open text and running through the axis term is DEVOUR THE EARTH AND ITS PRODUCE AND SET ABLAZE THE FOUNDATIONS OF MOUNTAINS. A sane question is, “How can a comet that will miss us by 39,900,000 miles devour anything at all here? While the word EARTH is somewhat frightening here, the Hebrew used (aretz) can also mean ground or soil and thus it could refer to the material on the comet’s surface. As for AND ITS PRODUCE AND SET ABLAZE, well passing within a mere 724,000 miles of the surface if the sun could do that to the comet, depending on its structure and composition. In this case the produce spoken of would be the tail of the comet.  For comparison purposes, the diameter of the sun is 865,374 miles. The matrix indicates that also set ablaze would be THE FOUNDATIONS OF MOUNTAINS. These we may presume also lie on the comet.

BURN WITH FIRE. This is also applicable to the comet as it reaches perihelion (closest approach to the sun) on November 28, 2013.

The fourth line likewise includes MOLTEN IMAGE, DESTROY AND ALL THEIR HIGH PLACES DEMOLISH. Again, all of this can apply to a comet gone molten from the heat of the sun. So which is it, the Earth or the sun that is more likely to be harmed? Logic dictates that without a radical alteration in course, it must be the comet that is in trouble, and a search of the responsible scientific literature seems to back this idea. An excellent article about how ludicrous this threat is can be found HERE. But does the Torah Code mention the sun in conjunction with this comet? It sure does. On the bottom line is THE SUN WAS RISEN. With such a close pass of the sun, as it rises on parts of this comet at such a close perihelion, it will likely devour the comet while setting it ablaze, turning it molten, destroying and demolishing it. Our greatest legitmate fear  is only about whether this process will ruin our fun by destroying our show. In fact you can read about it being a probable bust HERE.

Finally, to my dear Christian readers and fans of the Book of Revelation, I am sorry to keep burst your bubbles. All through my life I have heard your predictions of impending doom based on the Book of Revelations. Thankfully, all have been proven wrong (including those for the years 2000 and 2012). That book predicts the destruction of Rome in a way that apologists need to work around, but the reality is that Rome was never totally destroyed, business is good there today, and the current population is between 3.2 and 3.8 million people live in the urban area, and 4,194,068 in Rome metropolitan area.[2][3][4][5][6] A false prophecy is a false prophecy and a false prophecy has no place in a Bible. This is just one reason why you will NOT find the Book of Revelation in a Jewish Bible.

The third line of the matrix has        As for discussions in related videos that NASA was shutdown due to the comet, they too were false. NASA was shut down because Obama wanted to make everyone miserable to keep his disfunctional ObamaCare health program. The Vehicle Assembly Building (VAB) that Comet Ison related films show to warn of the comet threat can be seen from my front door here in Cape Canaveral. Everyone in this condominium who works for NASA is back at work.  The only question when I first published this article was about what was then the next mission to Mars - Mars MAVEN. Three days ago I watched, felt and heard it take off on schedule on November 18, 2013. The only problem was that it was a mostly cloudy day, so we could only see it for about 10 or 15 seconds before it was hidden by the clouds. You can read my article about Mars MAVEN here.

The pictures of a troop movement were nonsense. That goes on all the time. Our miitary is positioned around the world. As a Coast Guard officer I was often involved with military outloads. They are standard operating procedure, and the numbers of vehicles shown on the film first linked to was by no means large by U.S. standards.