On May 1, 2011 Osama Bin Laden was killed by a U.S. ground operation in Pakistan. On the top matrix the axis term is BIN LADEN DEAD at minimum ELS. The year of his death (5771/2011) is parallel to his fate. Crossing his name in the open text is DO NOT CONTAMINATE YOURSELF OVER A DEAD PERSON AMONG HIS PEOPLE. The open text phrase AND WASH IN WATER  is suggestive of how Bin Laden's body was washed aboard the aircraft carrier Carl Vinson before being buried at sea. The top matrix also shows NAVY in the 34 letters around BIN LADEN DEAD. The right Code here is known to all Navy and Coast Guard Members. That would be BRAVO ZULU which means WELL DONE!  A continuation of the same matrix is offered on the second matrix.

The top matrix includes the word HOAX which was sought after I heard concerns about why our Government was so quick to dump Bin Laden's body at sea. Concerns about a possible hoax grew as the Obama Administration decided to not release pictures of Bin Laden's body. Odds against HOAX appearing in 184-letters (with background shaded in light blue) around BIN LADEN DEAD were about 61 to 1, but they dropped to about 2.5 to 1 in the full 836 letters of the top matrix (not significant). Significance of other terms on the matrices are discussed at the bottom of this page. 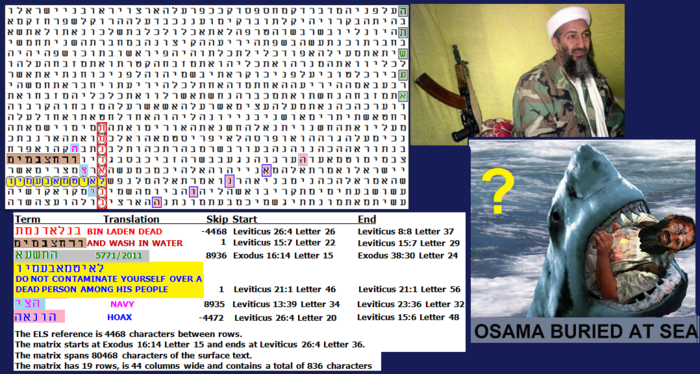 On the next matrix, the axis term is still the same BIN LADEN DEAD and we again see DO NOT CONTAMINATE YOURSELF OVER A DEAD PERSON AMONG YOUR PEOPLE. WAR is the same absolute skip as BIN LADEN DEAD, though it runs in the opposite direction. Bin Laden was killed by U.S. Navy Seals, and we see an ELS ofNAVY on the matrix. A short form of the year, (5)771/2011, of the killing is on the matrix. A nonstandard spelling of OBAMA is included (the usual spelling ends with a letter hey rather than the alef used here). There is also an ELS of PRESIDENT. Could the President have ordered the hit earlier?  News reports indicate that by August, 2010, we had determined Bin Laden's exact location in Abbottabad, Pakistan - where he was apparently hiding out in a sprawling compound on the outskirts of town. Was the hit delayed for training purposes, or to get the job done closer to Obama's reelection campaign? The word DELAYED is on the matrix. Finally, the word SHOT is on the matrix.  If deliberate it probably refers to BIN LADEN, but it touches both the transliteration of OBAMA and PRESIDENT. As NATO just killed Colonel Qaddaffi's son and grandchildren, and as it followed that up with the Bin Laden hit, it is apparent that the President's security team now has additional concerns for his safety. It is obvious from other matrices on my web site that I am not an Obama fan.  However, even a broken clock is right twice a day. It's about time that somebody got Bin Laden.  The President is to be congratulated for a job well done here.  I can only hope that this is the beginning of a much needed improvement in his job performance.

STATISTICAL SIGNIFICANCE. Normally I do not like to publish matrices that are much over 400 letters in area unless they contain ELS maps where a priori course angles combine with a priori key terms to produce a significant matrix. An analysis of the second (861-letter) matrix above shows why this remains so. As is my standard protocol, I do not assign any significance to an axis term (here BIN LADEN DEAD) because the term is either there (in which case the a priori key words can be sought in conjunction with it) or the axis term does not exist, in which case the search for terms associated with it ceases. Further, a posteriori terms or phrases like DO NOT CONTAMINATE YOURSELF OVER A DEAD PERSON AMONG YOUR PEOPLE and AND WASH IN WATER can not be included in a statistical analysis because there are many such interesting phrases that we might find just as intriguing, if not more so. This does not mean that the appearance of a posteriori terms can be completely dismissed. If the Creator chose to encode axis terms with these phrases, then all we can do is read what's there, and marvel at it. But analyzing such terms scientifically is like trying to determine the mass of a soul (it can't be done).  WAR is a 5-letter Hebrew word. It is at the same absolute skip as BIN LADEN DEAD, though it runs in the opposite direction. For such terms I use the frequency in Torah at the absolute skip of the axis term, and at skip +1 and -1. There was about 1 chance in 10 that such an ELS would be on the matrix. It was the most significant key word, but to show it I had to expand the matrix enough to decrease the statistical values of NAVY, the year, (5)771/2011, OBAMA, PRESIDENT, DELAYED and SHOT on the matrix. The final statistical value of the matrix was one chance in 14.5 (p = 0.069). This is less than the value of the word HOAX in the blue shaded area on the first matrix. Obviously, different odds would be derived if I did not include WAR on the second matrix. There are many matrices on this site that are enormously significant. There may be a term on these matrices that I have not yet sought that may move it into such a category, but for now what I see here is more in line with general fates as was discussed in my page on Talmud and Names. However, click here to see a significant match of Pakistan with Bin Laden. 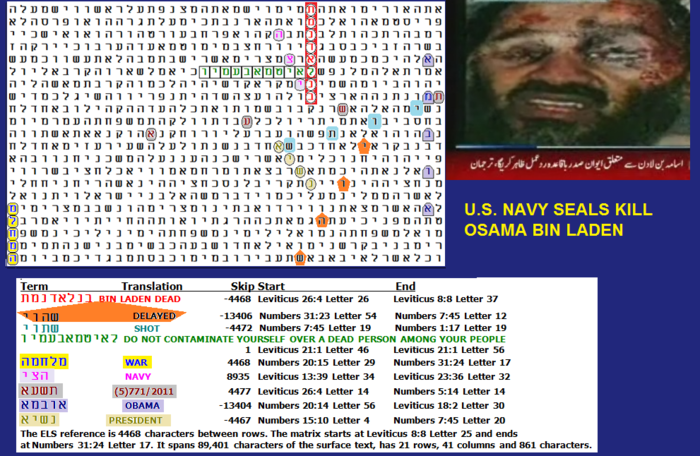